For decades, Charlotte has been one of the East Coast’s biggest cities for movies and television production. It’s known for producing several legendary films such as Days of Thunder, Nell, Dirty Dancing, and most recently, The Hunger Games.

Here are the 10 most significant filming locations around the Charlotte region that you may recognize on the big screen;

Days of Thunder was filmed in 1990 – mostly here in the Charlotte region. The Charlotte Motor Speedway in Concord, was the setting for many of Tom Cruise and Nicole Kidman’s most iconic scenes. City Chevrolet, a sponsor for Cole Trickle early in the movie, is a real-life Charlotte area dealership that is owned by Rick Hendrick.  And Hendrick Motorsports prepared most of the cars in the movie and later used some of them in real races. The scene where Tim approaches Harry on a tractor was filmed on NASCAR legend Junior Johnson’s former farm off Junior Johnson Highway in the Yadkin Valley.

Leatherheads, starring George Clooney, John Krasinski, and Renée Zellweger featured Charlotte as the backdrop during multiple football game scenes. Several sections of the film were shot at the American Legion Memorial Stadium (CPCC Uptown Campus) with the Charlotte skyline in the background serving as the 1920 Chicago skyline.

The Bank of America Corporate Center was the JPS Funds building where Hal worked. St. Peter’s Episcopal Church on the corner of North Tryon and 7th streets was where Hal asked out the first girl. The old Fuel Pizza on North Tryon Street was where Hal and Rosemary had one of their first dates. The couple shared a milkshake at Pike’s Soda Shop in the South End. Freedom Park, served as a beautiful setting when Hal introduced Rosemary to his friend Mauricio. Rosemary introduced Hal to her parents in the South Park neighborhood. After Mauricio reversed the spell on Hal, they abandoned Rosemary at a restaurant and walked through the Latta Arcade courtyard on South Tryon Street. The Capital Grille in Uptown Charlotte was the restaurant where Rosemary saw Hal at dinner with Jill.

This recent film by the Kendrick Brothers shocked Hollywood, opening #1 in box offices throughout America and grossing over $11 million in its first weekend premier. 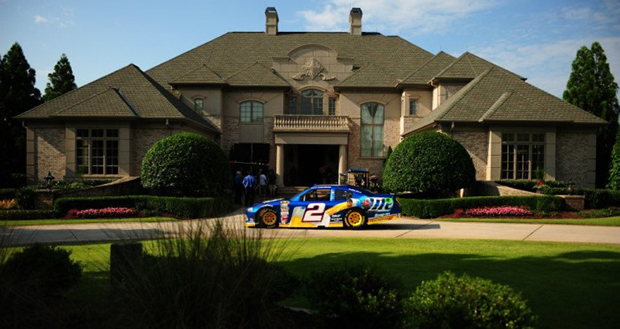 The Charlotte Motor Speedway was the setting for multiple scenes in the 2006 motorsports comedy “Talladega Nights: The Ballad of Ricky Bobby” starring Will Ferrell and John C. Reilly.

You can also find Ricky Bobby’s dream house right on the shores of Lake Norman. Apparently after filming ended the mansion was left abandoned and several fans found ways to sneak in and get their own shake ‘n bake experience.

The iconic film from the 60s starring Jennifer Grey and Patrick Swayze was filmed entirely on Lake Lure, which is just west of Charlotte in Rutherford County.

Today, the lake even hosts an annual Dirty Dancing Festival.

#3 Lake Norman – Careful What You Wish For

The blockbuster hit from the mid-90s starring Jodie Foster and Liam Neeson was filmed almost entirely in Charlotte. One of the most iconic scenes was shot in the now demolished Days Inn at 601 N Tryon St. (demolished 12/11/14)

The Hunger Games starring Jennifer Lawrence, Woody Harrelson, Lenny Kravitz, Josh Hutcherson, and Liam Hemsworth, was filmed exclusively in North Carolina, and primarily around the Charlotte region. Charlotte’s Convention Center was the setting for the underground loading dock served as the platform where Katniss became “the girl on fire.” The Knight Theater was the stage for the tribute interview scene between Katniss Everdeen and Caesar Flickerman. Amelie’s French Bakery, even provided the sweets that tempted Haymitch, Effie, Peeta and Katniss in the lavish dining car en route to the Capitol. And The Depot at Gibson Mill, an 85k SqFt antique mall, served at the backdrop for the coal mining town in District 12.

Today, you can take Hunger Games interactive fan tours that take you to all major locations in the North Carolina mountains.