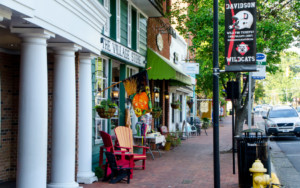 One Charlotte suburb was recently named by finance website 247wallst.com as the richest town in North Carolina  – richer than even the small destination towns on the coast and in the mountains.

According to the report, Davidson, NC, about 10 miles north of Charlotte, is officially the richest town in North Carolina, on a per capita basis.

The report notes that Davidson is “One of only two North Carolina towns where most households earn six-figure incomes,” and “in addition to being the state’s wealthiest town, Davidson is also the best educated.”

Here are some of the other wealthiest towns of each state: