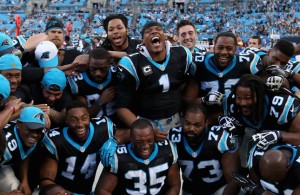 While it may be hard to believe after a 5 game losing streak, the Carolina Panthers do still have a chance at a Super Bowl win this year, albeit, a very slim one…

Before winning the Super Bowl, they’d first have to make it to and win the playoffs.

The Panthers currently have a 6-7 record and are sitting at the #7 spot in the NFC, with only 6 teams making it to the playoffs, they would have to advance past one of the following teams:

The Panthers still have 3 games left – 2 against the Saints and 1 against the Falcons. If they win all 3 games, they will be 9-7, meaning several of the above teams would still have to lose a couple games, and the Redskins and Eagles (also currently both 6-7) would have to perform worse than the Panthers for them to make the top 6.