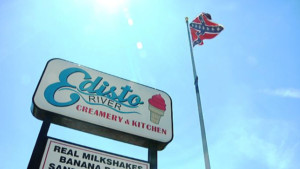 A business owner in South Carolina is now losing business, receiving threats, and getting in fights with local residents over a massive Confederate flag flying high above his ice cream shop – the problem is, he’s not allowed to remove it.

The small town of Orangeburg, SC, has a population of about 13,000 people, three fourths of which are black. Many residents interviewed by CNN said they would never step foot inside the Edisto River Creamery as long as the confederate flag is flying above it.

Tommy Daras, the owner of the shop, said he wants to remove it, but before buying the property, the former owners sold .003 acres surrounding the flag pole to the “Sons of Confederate Veterans” group for $5.

Daras initially accepted the flag and the nearby marker when he first bought the property, but soon after the 2015 church shooting in Charleston, the group installed a much larger flag and things began to escalate.

“From that day forward, all hell broke loose for me,” Daras said. “My windows were broken out, by phone was ringing off the hook, my employees were harassed. I was fist-fighting with people in the parking lot. Everyone in town assumed it was my property because it looks like it’s attached to this building.”

Daras has now hired a lawyer, but The Sons of Confederate Veterans said the flag will not be removed as long as they’re alive.

The attorney has argued that the tiny corner lot is zoned for commercial use and the flagpole and marker are violating the zoning rules, but they city said the zoning is fine, the attorney now plans to appeal.

The attorney also says their land sale records show no exception for the roughly 130-square feet that the former owner claims to have sold to the Sons of Confederate Veterans 10 year earlier, so they may not even legally own the tiny parcel. This case will now likely go to court.