This week, some of Charlotte’s top musicians will be coming together to raise money for Ukrainian refugees.

The benefit concert, “Charlotte For Ukraine” will be held on Thursday night at the Visulite theater in Charlotte’s Elizabeth neighborhood. 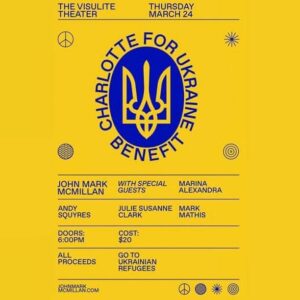 Tickets cost $20 each and 100% of ticket sales will go to Tearfund for their work with people displaced by the conflict in Ukraine.

John Mark McMillen has released over 20 albums and is perhaps most well known for writing one of the most iconic Christian songs of the past decade – “How He Loves” – a song re-recorded by dozens of artists, including Chris Tomlin and David Crowder, and sung millions of times in churches all around the world.

McMillen’s iconically deep tone was also recently commissioned to be the voice of the Terminator: Dark Fate trailer, and for the trailer of Paramount’s Evil series.

The Charlotte for Ukraine benefit concert will also feature classical guitarist Marina Alexandra. According to her website, Alexandra was born in the Ukraine, where she began her guitar studies at the age of six. In 1996 she immigrated with her family to the United States and began teaching and performing classical guitar from her home base in Charlotte. Over the past 15 years, Marina has received awards in several guitar competitions including the Music Teachers National Association State and Regional Competitions and semifinalist in the 6th annual Edwin H. and Leigh W. Schadt National String Competition for classical guitar.

The concert will also include Andy Squires:

You can find out more information or buy tickets for the Charlotte for Ukraine benefit concert here.