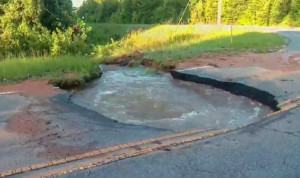 Yesterday in North Charlotte, a large chunk of David Cox Rd. was swallowed up by an underground sinkhole.

The sinkhole was caused by the rupture of an underground water main. Road crews are were will hopefully finish up repairs to the road by the end of the day today after the water main is repaired.

The sinkhole formed underneath the eastbound lane of David Cox Road near West Sugar Creek Road.

Last summer, a far larger sinkhole formed underneath Independence Blvd., which shut down traffic for over a day.

As our city’s infrastructure continues to age, water main breaks and sink holes will continue to happen with greater regularity. Charlotte Water has stated that water leak repairs have already risen by 27% over the last 3 years.

At this point, they say they can only respond to underground breaks once surface water is detected.