The Sherwin-Williams Company held a ceremonial groundbreaking today to mark the start of construction of a 36,000-square-foot manufacturing facility and 800,000-square-foot distribution and fleet transportation center just north of Charlotte in Iredell County. The project also adds four new rail spurs at the existing manufacturing site and leaves another 200,000 square feet available for future expansion at the distribution site.

“Today marks an important milestone for Sherwin-Williams in continuing to serve our customers and investing in our employees,” said John G. Morikis, Sherwin-Williams Chairman and Chief Executive Officer. “This project will support our growth for years to come. We are proud to be a part of the community here and grateful for the partnership we have with the local and state officials.”

State, county and local public officials, Sherwin-Williams employees, as well as project contractors and partners attended the ceremonial groundbreaking to celebrate the beginning of the project, which is expected to be complete by the end of 2024. 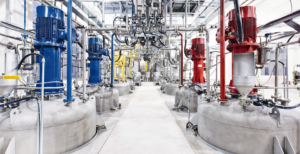 Together, the facility upgrades will add millions of gallons of annual manufacturing capacity and sizable pallet storage capacity to support the Company in meeting increasing demand for its architectural paint and coatings products. Sherwin-Williams plans to invest a minimum of $300 million in the project and add more than 180 full-time jobs at the site over the next three years, which would essentially double the existing workforce.

The Company announced in February that it signed an agreement with the state of North Carolina, Iredell County and the City of Statesville to significantly expand its architectural paint and coatings manufacturing capacity and establish a larger distribution facility in Statesville, North Carolina.

Sherwin-Williams looked at multiple locations for potential expansion opportunities in a competitive vetting process before selecting the Statesville facility. The Statesville facility was chosen for its transportation infrastructure, the strength of the current workforce and depth of the local talent pool, the facility’s ability to handle additional capacity, and a location that provides for the centralization of existing distribution opportunities for the Company’s regional operations.

“This project in Statesville adds to North Carolina’s reputation as a top workforce location for modern manufacturing,” said North Carolina Governor Roy Cooper. “With more than 2,400 full-time Sherwin-Williams employees in our state and more coming, our state is committed to the education and training that will create success for years to come.”

Additionally, Sherwin-Williams will receive approximately $30 million in state, county and local government incentives toward the project. This investment reflects the strength of the public-private partnership between Sherwin-Williams and the state of North Carolina, Iredell County and the City of Statesville and underscores the Company’s confidence in the region and its people.

“We are thrilled Sherwin-Williams, a company that has been an integral part of our community since 1993, chose to make a significant investment in Statesville for both its manufacturing and distribution facilities,” said City of Statesville Mayor Costi Kutteh. “The decision to expand their footprint here represents the largest paint manufacturing operation for the company in North America based upon total gallon capacity and the largest single investment in the history of our city.”