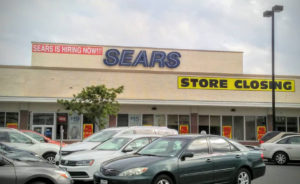 Sears just officially filed for Chapter 11 bankruptcy and announced they will be closing an additional 142 stores by the end of this year.

“The reduction in the number of stores that the company operates, as well as the reconfiguration of the stores it continues to operate, is part of the company’s larger process of transforming its business model to place a greater emphasis on providing dynamic online and in-person shopping experiences for its customers,” Sears noted in their bankruptcy documents.

The additional closings will include 3 Sears stores in North Carolina;

And 5 K-Mart stores in North and South Carolina (KMart purchased Sears in 2004);

In addition to the 142 new store closings announced today, Sears is also set to close 46 stores by next month (originally announced back in July), including the following locations in the Carolinas and Georgia (mostly now liquidated);

New liquidation sales are expected to begin at the 142 additional store closings shortly.

How to get the best rates on international parcel delivery?