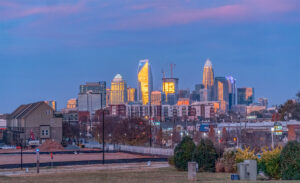 After a wild 2021, rent growth is finally flattening out across the United States. In November, the national rent index increased a marginal 0.1%, the lowest growth rate measured all year. Prices have risen nearly 18% in 2021, but as we enter the slow winter season, the market is finally beginning to cool.
This month, rents fell in 53 of the nation’s 100 largest cities. Boise ID saw the largest decline for the second straight month (-3.7%), and prices fell in other fast-growing cities that saw major rent growth this year, like Spokane WA (-3.1%), and Reno NV (-3%). But they also fell in some of the nation’s largest and most expensive cities, like San Francisco (-2.7%), Seattle (-2.1%), and Boston (-1.9%).
For more analysis of the newest monthly data, check out our full December Rent Report.
Here are some highlights for the Charlotte market: