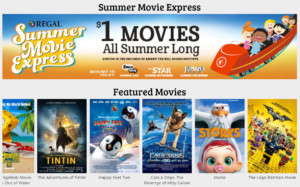 Regal Theaters has just announced their new “Summer Movie Express” special – offering family friendly movies all summer long for just $1 per person. A portion of the $1 admission will be donated to the Will Rogers Institute.

The specials will be every Tuesday and Wednesdays throughout the summer, starting at 10am. Here is the full schedule for Regal’s “Summer Movie Express”:

Week 7 – Tue. Jul 25 to Wed. Jul 26
The SpongeBob Movie: Sponge Out of WaterThe Adventures of Tintin

You can check out more info or buy tickets here.