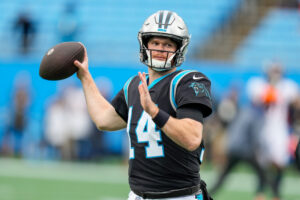 Carolina Panthers rewrote the record books after snarling Detroit Lions 37-22 on their Christmas Eve outing, courtesy of their relentless ground game, which bodes well for 2023.

The Panthers’ offense outclassed the Lions’ defense during a one-sided first half, when the visitors twice set a franchise record with a 24-7 lead.

They roared past the Lions to notch a record first-half total of 364 yards to beat their previous record of 349 yards against the Atlanta Falcons in 2015.

They netted 240 first-half rushing yards to top their previous mark that had stood since 2009, and were three touchdowns off of just 22 carries.

Running backs Chuba Hubbard and D’Onta Foreman both topped 100 rushing yards in the remarkable first half, the first time that’s happened in the NFL since Fred Taylor and Maurice Jones-Drew achieved the same feat for Jacksonville against Indianapolis in 2006.

Both Hubbard and Foreman have impressed this season, and should soon be tussling with other stars to be considered among the NFL’s top players.

The Panthers totaled a franchise-record 570 net yards to surpass their former high of 548 yards against the Miami Dolphins in 2017.

There was just no stopping the Panthers, who were on fire to set a new single-game rushing record as well by racking up 320 yards with seven rushes of at least 20 yards.

Current quarterback Sam Darnold has upped his game, and could soon be getting the same sort of accolade if he continues his rich vein of form. As well as completing eight of his 12 passes for 124 yards against the Detroit Lions, he also ran for 21 yards and a score of his own on four carries.

Despite being slow from the gate with just a single win from their first six games, the Panthers are now a totally revitalised team.

Their initial slump meant changes had to be made. These included firing Matt Rhule for Steve Wilks, trading Christian McCaffrey and releasing misfiring quarterback Baker Mayfield.

They are on such a fine run that they are in with a chance of topping the NFL South Division, with Wilks’ squad seemingly fearless. For those who fancy a flutter on American Football, they can find a trusted sportsbook of their choice in the US. If outside of the US, even as far as the Down Under, you can have a glance at the best betting sites in Australia for the latest odds.

However, it is a tough task on paper for the Panthers as they must win their remaining games to clinch the division and host a playoff contest at their Bank of America Stadium for the first time since lifting the NFC Championship in 2015.

Dominant displays, like the one against the Detroit Lions, are vital for the polished Panthers if they are to navigate their way further in this year’s competition.

Interim head coach Wilks has transformed the fortunes of the Panthers from being a laughing stock under Rhule, and made the Bank of America Stadium a cauldron for visitors.

Rhule’s insistence to remove legendary figures to soothe his own ego didn’t win him many fans. J.J. Jansen and Shaq Thomson are the only players left from the Panthers’ memorable run to the Super Bowl in 2015.

The former head coach removed the highly-popular Keep Pounding chant from their pre-game festivities, which had fans fuming. A swift U-turn followed and this was a one-off blip during his three-year tenure.

Yet Rhule experienced an entire calendar year without a home triumph, which eventually accounted for team owner David Teppe giving him the boot.

Wilks has been a breath of fresh air and he brings extra passion as well as affinity with supporters as he hails from Charlotte. He went to college at Appalachian State, and he was part of the Panthers staff during their most successful era in the mid-2010s.

He appreciates that their glory days were achieved by playing hard and physical football, although nowadays he trusts his troops and maximizes the weapons at his disposal.

The Panthers do possess some limitations, but Wilks has brought in Al Holcomb as defensive coordinator to dramatically improve them.

By mixing things up in order to beat the opposition, having fully researched their strengths and weaknesses with weekly planning, is paying dividends and surely proves to Teppe that Wilks at the helm is not a gamble.

Tepper yearns for the Panthers to be an annual contender and Wilks’ inability to win more on the road leaves some obvious question marks hovering. Their final matches should determine whether the team owner will place his trust in the interim coach or call time on Wilks.