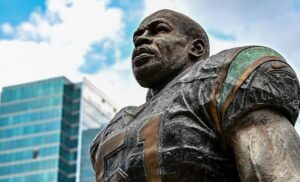 We know, we know. A Carolina Panthers record of 5-12 in 2021 on top of a 5-11 record the previous year doesn’t bring a lot of hope for the 2022 NFL season. But this franchise has seen a lot of ups and downs in its 25+ year history. Things can, and often do, change overnight in the NFL. The Panthers went from a 7-9 inaugural year to winning its division the following season, falling one win short of reaching the Super Bowl.

So, don’t count out the Panthers in 2022. Should you go out and bet on them to win the Super Bowl? Well, we might not, but hey, you do you. In fact, a potentially bad season doesn’t mean you can’t take advantage of all of the free picks and parlays available to you. Any game can be made more entertaining with a small wager.

So, while you wait for the 2022 NFL season to kick off, let’s climb into our “way back machine” and reminiscence about the Panthers better days and the players which made them so special. Here’s our list of the 15 greatest players to ever don a Panthers uniform.

#15. DeAngelo Williams, RB. Williams was part of the Panthers 1-2 punch at running back. He racked up 6,846 career rushing yards with Carolina, and led the league with 18 rushing touchdowns in 2008.

#14. Kevin Greene, LB. Greene only played three seasons for the Panthers, but in that short time he racked up 41.5 sacks – 5th all-time for the team. In 1996, Greene finished second in the NFL’s Defensive Player of the Year voting while leading the team to the Conference Championship Game.

#13. John Kasay, K. Kasay is the team’s all-time leading scorer, and was the backbone of the special teams unit for 15 seasons. He completed 82.8 percent of his field goal attempts while with the team.

#12. Greg Olsen, TE. Now a commentator for FOX Sports, Olsen was a great tight end. He ranks third all-time for the Panthers in receiving yards (6,463) and fourth for receiving touchdowns (39).

#11. Jordan Gross, OT. A member of the Panthers Hall of Honor, Gross started 167 games for the Panthers, the most of any player in franchise history. He was the prime mover in the Panthers vaunted rushing attack during the early 2000s and appeared in nine Panthers playoff games.

#10. Sam Mills, LB. Inducted into the Pro Football Hall of Fame in 2022, Mills only played three seasons with the Panthers, joining the franchise in its inaugural season. If nothing else, Mills coined the Panthers rally cry of “Keep Pounding” in 2003.

#9. Muhsin Muhammad, WR. Statistically, Muhammad is the second-best wide receiver in the franchise’s history. He’s number two all-time in receiving yards (9,255) and touchdowns (50) during his two stints with the team.

#8. Christian McCaffrey, RB. McCaffrey could easily catapult his way to the top of this list, but the injury bug has bitten him for the past two seasons. If healthy, there perhaps hasn’t been a more exciting player to represent Carolina.

#7. Wesley Walls, TE. One of the best tight ends in 1990s, Walls cemented his place in the Panthers Hall of Honor by scoring the first playoff touchdown in franchise history. A perennial All-Pro, Walls is third all-time for the Panthers with 44 receiving touchdowns.

#5. Jake Delhomme, QB. In his first year with the team, Delhomme led the Panthers to within one minute of a Super Bowl championship. He remains second in Panthers’ history for both passing yards and touchdowns.

#4. Luke Kuechly, LB. Nicknamed “Captain America,” Keuchly was the NFL’s Defensive Rookie of the Year, and remained a defensive force throughout his career. A seven-time Pro Bowler, he remarkably ranks third all-time for the Panthers in interceptions (18).

#3. Cam Newton, QB. Newton could do it all under center, and at times, appeared to be the team’s sole offensive player. Like Delhomme, Newton propelled the Panthers to the Super Bowl, but he, too, came up short. Still, he remains the franchise’s all-time statistical passing leader.

#2. Julius Peppers, DE. In his 10 seasons with the franchise, Peppers powered the defense while frightening opposing quarterbacks as he racked up 97 sacks, most in Panthers’ history. The lanky defensive end also snagged six inceptions and scored three touchdowns.