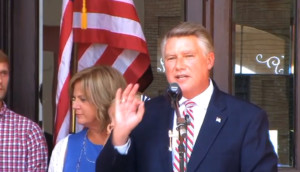 The pastor of one of the most prominent and historic churches in Charlotte just made his official campaign speech to declare his campaign to run for US Congress.

Mark Harris decided to resign as senior pastor of Uptown Charlotte’s First Baptist Church after 12 years to focus all his time on his campaign.

Harris will be running for North Carolina’s 9th Congressional District, which is currently held by Republican Robert Pittenger, who beat Harris in the 2016 GOP primary by 133 votes.

This past weekend, his supporters gathered at the Old Courthouse in Monroe to officially launch the campaign.

In his speech, he expands on the theme of “faith, family & freedom”, and explains why his personal history as a servant-leader best positions him to represent the values and needs of their District in bringing about the needed changes in Washington, DC: