Over the past 24 hours, Hurricane Matthew has straightened out its trajectory, causing President Obama to issue a national emergency for our state. The storm is now expected to continue to hug the Carolina coast up through much of North Carolina, then swing back out to sea after passing by Wilmington. 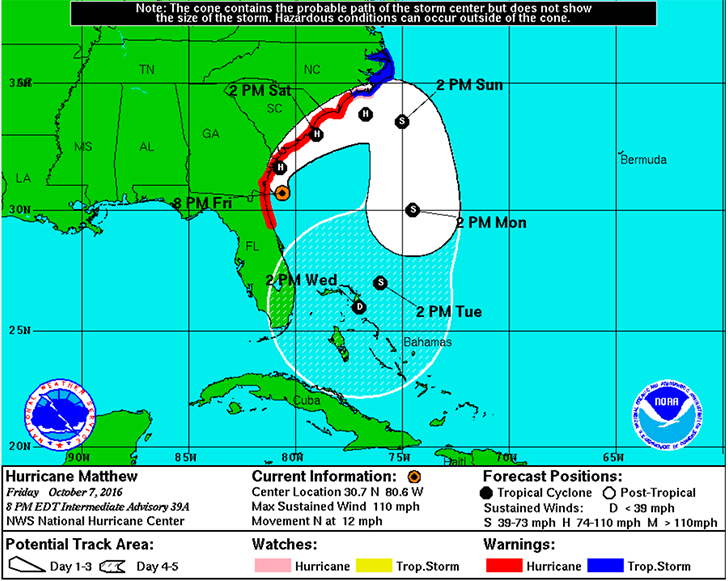 The Federal Emergency Management Agency (FEMA) announced that federal emergency aid has been made available to the State of North Carolina to supplement state, tribal, and local response efforts in the areas affected by Hurricane Matthew beginning on October 4, 2016, and continuing.

Specifically, FEMA is authorized to provide emergency protective measures (Category B), limited to direct federal assistance, under the Public Assistance program at 75 percent federal funding. Elizabeth Turner has been named as the Federal Coordinating Officer for federal response operations in the affected area. Additional designations may be made at a later date if requested by the state and warranted by the results of further evaluation.

North Carolina Gov. Pat McCrory also expanded our state of emergency to include all 100 counties in the Tar Heel State (the initial declaration included 66 counties in eastern and central North Carolina).

Several major attractions are now being shut down ahead of Matthew. Officials at Carowinds said it would not be holding its SCarowinds nighttime Halloween event due to the storm. NASCAR’s Bank of America 500 race in Concord will still run tomorrow afternoon and evening, but race organizers are closely monitoring the storm’s progress to see if the event will have to be canceled.

The US National Hurricane Center is recommending that North Carolina residents have their disaster emergency kits stocked and readily accessible in case of extended flash flooding or downed power lines.

We will be updating this article as we receive new information.