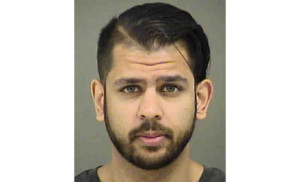 On October 19th, police found the deceased body of a woman beside Dobys Bridge Road in Fort Mill.

After an autopsy, investigators discovered that she was pregnant and had been killed somewhere else before being dumped beside the country road just south of I-485.

This morning, a joint task force between Charlotte and Fort Mill police departments arrested 28-year-old Mahmood Amjad Bhatti and charged him with the double murder of Natalie Merrick and her unborn child.

Bhatti and Merrick were dating and living in a townhouse together on Via Romano Dr. in Charlotte, where they already had 1 other child together.

Merrick’s death marks the 74th, and her unborn child marks the 75th homicide of 2017.