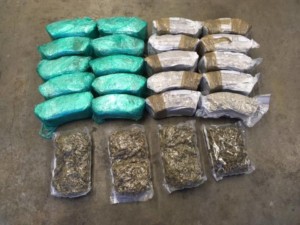 Over the weekend, local police and federal DEA officers searched 2 cars on I-77 and discovered over 100 pounds of high-grade marijuana (with an estimated street value of $100k).

According to the police report, 27 year-old Miguel Angel Nieto, and 25 year-old Francisco Antonio Rivas-Ortiz, both Charlotte residents, are now being held without bond in the York County jail on charges of drug trafficking. If convicted, they could face a mandatory sentence of 25 years in federal prison.