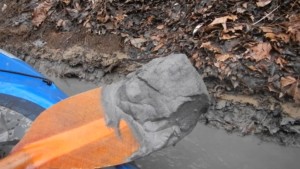 Hundreds of families are still in crisis mode after receiving “Do Not Drink” notices back in 2015, telling them their groundwater has been contaminated by toxic chemicals found in the leaking Duke Energy coal ash pond in Belmont, NC.

In spite of many families using only bottled water for drinking and cooking, many families are still getting sick and they don’t feel like the state is doing much to help.

Amy Brown is a mother of two young boys living just 1,000 feet from Duke Energy’s coal ash pond. She received the notice 2 years ago that informed her that her groundwater was laced with cancer-causing industrial chemicals such as hexavalent chromium.

“When we turn on the faucet, we turn on fear,” said Amy, who was told not to drink or cook with the contaminated water — but given no information about when the problem would be fixed or what to do in the meantime. After begging, pleading and finally even threatening Duke Energy, the company finally agreed to provide her family with bottled water. But nearly a year later, Amy’s family is still living off bottled water for drinking, cooking, and even brushing their teeth. And in the meantime, her repeated letters to our governor about the situation have gone unanswered.

In 2016 North Carolina’s top elected officials held a secret dinner meeting at his mansion in Raleigh with Duke Energy executives, their attorneys, and state environmental officials. Neither the state nor Duke Energy will say what was discussed at the secret meeting — but it just so happens that a short time later, the state reduced Duke Energy’s fine over leaking coal ash pits throughout North Carolina from $25 million for just one site, to $7 million for all 14 sites across the state. Meanwhile, the leaking coal ash pit next to Amy’s house was classified as “low priority” — an accurate description, Amy says, of how our state views her family.

Deb Baker is another Belmont resident who’s already lived off bottled water for over a year now. Her husband died in 2008 of a mysterious lung disease at the age of 46, despite being a non-smoker who had been perfectly healthy before they moved to Belmont. As her husband’s condition deteriorated, doctors told her the cause had to be environmental — but the source remained unknown until Deb received her own Do Not Drink notice years later.

“I definitely believe the coal ash had something to do with my husband’s lung disease,” said Deb, adding that some of her neighbors are showing the same symptoms as her husband.

Unfortunately, Amy and Deb’s stories are by no means unique. Over 400 families in more than a dozen communities across North Carolina have received these Do Not Drink notices, yet our state still refuses to publicly acknowledge their plight.

Please share this article to help spread the word!