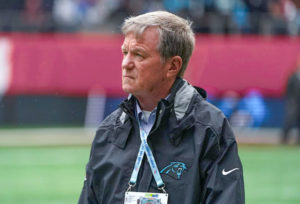 After 22 years with the team, the Carolina Panthers have just fired their GM, Marty Hurney.

Owner David Tepper said in a statement that the two had increasingly different opinions about the structure of operations, with Hurney favoring a more traditional approach, and Tepper wanting a more data-driven process.

“I think sometimes you just need a restart, a refresh,” said Tepper said. “We did it last year on the coaching side. Maybe you could say it should have been done before on the GM side. Maybe it should have been. I’m sure people may say that, or otherwise, on both sides. I think it’s just time, on both sides, to do that. It just seems like the right time to move forward.”

Hurney first joined the Carolina Panthers in 1998 as their then ‘Director of Football Administration’ and was promoted to General Manager in 2002.

Tepper said he currently has some prospects in mind to fill the spot, but hasn’t released any names yet.

What do you think about the decision to fire Marty Hurney?