The NC Department of Health and Human Services just released the opioid overdose figures from 2017 – they’re alarming to say the least. Emergency room visits saw a nearly 40% increase in opioid overdose cases from 2016 to 2017, with over 5,700 visits.

Given that there were roughly 2,879 cases in 2009, our state has now almost doubled in cases over the past eight years. 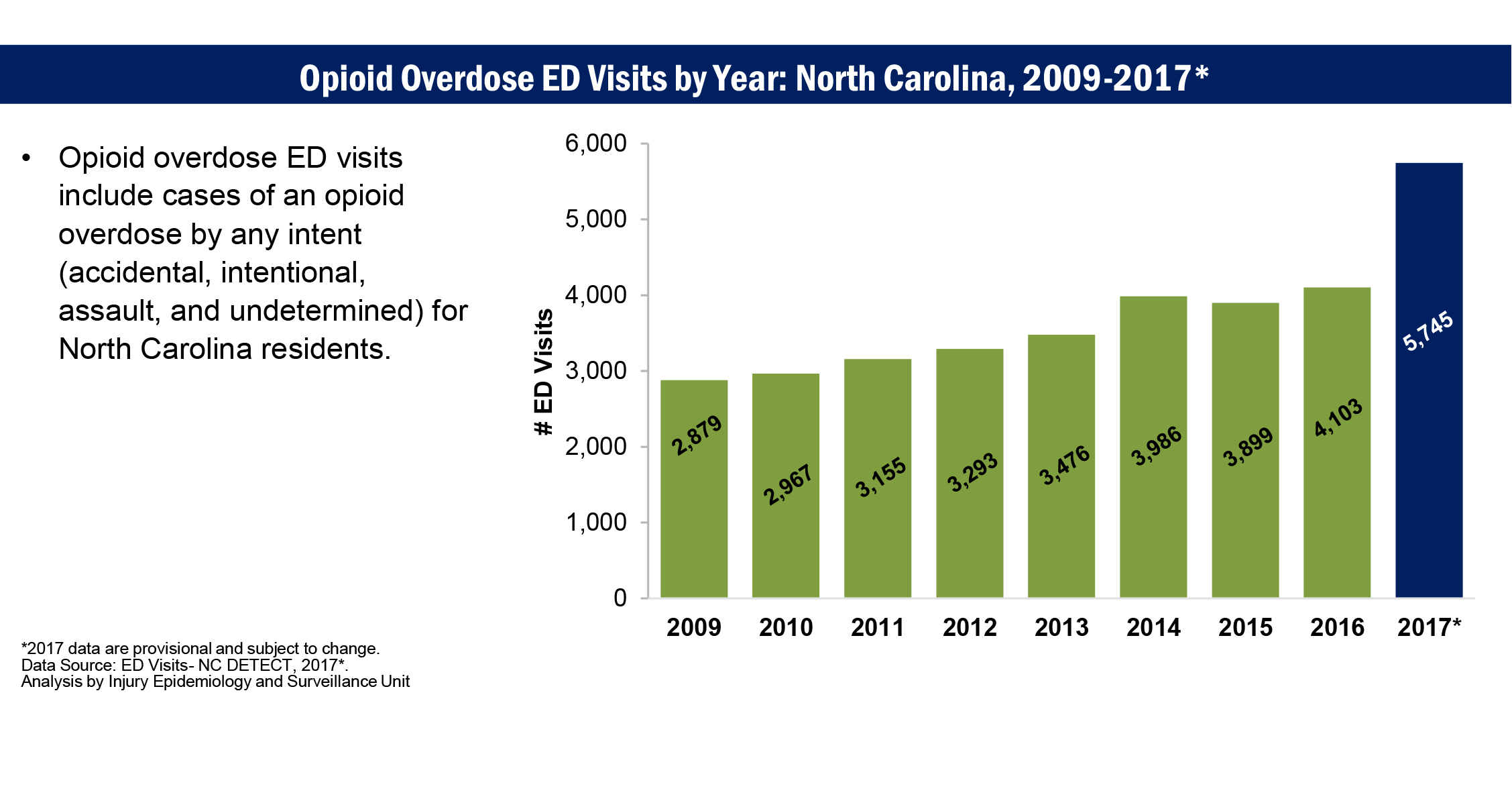 Heroin accounted for about 68%, or 3,924 cases, with the rest of the visits resulting from of opium, methadone and various other natural and synthetic opioids.

Stokes and Yadkin counties saw the highest percentage of cases, with at least 100 visits per 100,000 individuals.

According to NCDHHS, “visits are tracked as part of North Carolina’s Opioid Action Plan, developed in 2017 with community partners to combat the opioid crisis. The plan includes measurable strategies to reduce the oversupply of prescription opioids, the diversion of prescription drugs and the flow of illicit drugs, increase community awareness and prevention, make naloxone widely available, expand treatment and recovery systems of care, and coordinate the state’s infrastructure to tackle the opioid crisis.”

“We are seeing progress in some areas, but the latest numbers show that we still have a long way to go to stem the tide of this crisis,” said Mandy Cohen, M.D., Secretary of the North Carolina Department of Health and Human Services. “We must continue to develop and implement innovative approaches to address the issue, working closely with our partners on both prevention and treatment.”

One major step the state recently took was to change Naloxone (opioid overdose antidote) from requiring a prescription, to now be available ‘over the counter’.

Despite the medicine being a proven life-saver, local pharmacists say people are not coming to them to get it or even asking about it, likely due to people simply not having enough information about it.

According to the Carolina’s Healthcare System, “Naloxone is a medication that counteracts an overdose caused by an opioid drug – administering naloxone may be the key to saving a person’s life before medical assistance arrives.”

Naloxone works by immediately restoring a person’s breathing. It can either be injected intravenously or deliver through the nose, via a special spray canister. It lasts about 30-60 minutes, so anyone administering the drug should immediately call 9-1-1, if they haven’t done so already, and stay with the patient until help arrives.

North Carolina also has the ‘Good Samaritan law’, which essentially protects people who contact emergency officials, then administer Naloxone to someone who has overdosed from any liability.