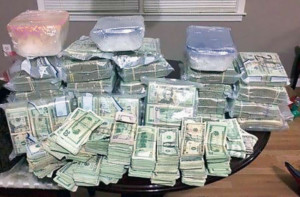 This past week, a combined task force of local authorities from 3 counties raided several homes to uncover over 24 pounds of methamphetamine and over $571,000 in cash.

Investigators now suspect that the group responsible has been engaged in the manufacturing and distribution of drugs throughout the Carolinas and across the country, according to WBTV.

“This will have a significant impact,” commented Burke County’s Sheriff Steve Whisenant.

Local authorities arrested 7 people during the raids this week, but they say they are still looking for 3 more, who are now considered armed and very dangerous.