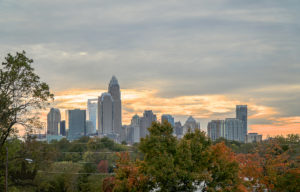 This Saturday November 23, Sustain Charlotte and the North End Community Coalition (NECC) will install 86 wayfinding signs in the North End community to increase walkability in the area. This work is possible through a Community Challenge grant from AARP as well as support from an Aetna Foundation grant.
Sustain Charlotte has been working with NECC to improve access to green space, calm traffic and make the community more walkable and bikeable while also advocating for improvements to the bus system. This area spans several neighborhoods, including Druid Hills, Graham Heights, The Park at Oaklawn, Greenville, Genesis Park, Lockwood, J.T. Williams and Brightwalk at Historic Double Oaks.
The North End has the lowest street connectivity index and sidewalk availability for areas surrounding Uptown Charlotte. Gaps in the sidewalk network and lack of crosswalks put people in danger and prevent them from walking and biking. The grant from AARP helps better connect the North End neighborhoods with signage.
Sustain Charlotte has worked hand-in-hand with NECC to decide where the signs will be located and where they should point. The signs highlight key destinations in the community including parks, recreational centers, and major streets. The signs will also encourage people to visit their neighbors in the surrounding neighborhoods.
Each sign has an arrow pointing to a specific destination and indicates how long it will take to reach it on foot. The signs include QR codes that, when scanned, provide directions to the destinations listed. The signs are also color-coded around certain themes, such as green for park space.
“The signs not only show all the amazing destinations the North End has to offer but also how easily accessible they are by foot, a healthier alternative to using a motor vehicle,” says Michael Zytkow, Program Coordinator for Sustain Charlotte and project lead.
Community members will gather at 1:00 pm at The Nest (330 Camp Rd, Charlotte, NC 28206) at Camp North End to begin placing the signage.
Charlotte’s inadequate bicycle and pedestrian infrastructure prevents many residents from being active and connected to opportunity. Twenty-eight pedestrians died on city streets in 2018. Only 42% of the County’s paved streets have sidewalks, and only 53% of households are within 1⁄2 mile of outdoor recreation. Charlotte ranks 50th of the largest 50 cities for upward economic mobility.