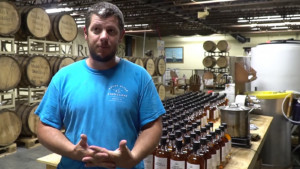 Just 5 years ago, the Muddy River Distillery opened in Belmont to become our state’s first legal rum distillery. As demand continues to outpace their supply, they’ve just made the decision to essentially double their output by installing a massive new 450 gallon still.

According to a statement the company made this past weekend, one of the major reasons the company raised its production capacity was so that it could accept more contracts to distill Belmont rum on behalf of others.

Their massive new still has been nicknamed “Independence” – it can hold about 13 times the amount the company first produced when it opened back in 2011.

We recently interviewed Muddy River’s owner, Robbie Delaney about the history of his distillery when filming our ‘Tour of Belmont’ video:

Muddy River distilled products are now sold in bars, restaurants and ABC stores throughout the Carolinas.