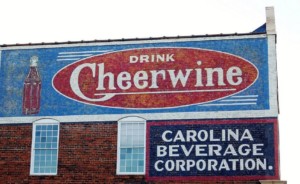 Cheerwine, the 103-year-old soft drink born and based in Salisbury, N.C., is once again teaming up with its home city to host the fourth annual “Cheerwine Festival” on Saturday, May 16, from noon-10 p.m. An estimated 60,000 people attended the 2019 event.
Attendees will enjoy tasty Cheerwine-inspired food and drinks, live entertainment, local craft vendors, family-friendly activities and plenty of delicious ice-cold cherry goodness in downtown Salisbury.

And for the first time in festival history, one lucky Cheerwine fan will have his or her original artwork worn by thousands as the official design for the 2020 festival t-shirt.
From now through March 6, fans can enter their designs at www.cheerwine.com/festival-contest for a chance to win the contest, along with: hotel accommodations; a Cheerwine Festival gift basket loaded with goodies from Cheerwine and the City of Salisbury; and Downtown Dollars to spend during the festivities. Judges will select the top five entries, based on visual appeal, uniqueness and creative incorporation of Cheerwine. The general public will select the winner by voting for their favorite design available on Cheerwine’s website. The winner will be announced in early April.

“We first hosted the ‘Cheerwine Festival’ in 2017 to commemorate the 100th anniversary of Cheerwine, and it’s since become an annual opportunity for us to celebrate our fans; the unique tastes, sips and sounds of the Carolinas; and our cheerful hometown,” said Joy Ritchie Harper, vice-president of marketing for Cheerwine and fifth-generation founding family member. “The festival has experienced tremendous growth over the last few years, and we are grateful for the growing number of people who travel from near and far to join us for a day of family-friendly fun.”

In just a few years, the Cheerwine Festival has resulted in a nice boost to the city’s economy, with 2019’s event resulting in an estimated impact of $1.5 million.

“Since the inaugural festival in 2017, we’ve looked forward to introducing more first-time visitors to Salisbury’s bustling downtown district that features one-of-a-kind restaurants and breweries, unique shopping, a thriving arts scene and more,” said Salisbury Mayor Karen Alexander. “We’re excited to have everyone discover our great city and see why it’s known as ‘a Carolina original.’”

For more information on the festival, t-shirt design contest and vendor applications for food, beer and crafts, visit http://cheerwinefest.com. Fans can also find details about the festival and contest as they are announced by searching the hashtag #CheerwineFest on social media.