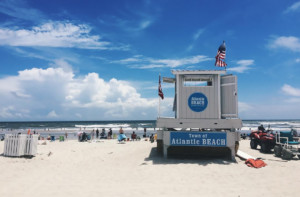 Four more people have died from strong rip currents along the North Carolina coast over the past 10 days.

The tragedies include; 21-year-old Justin Eakes, who died at Atlantic Beach trying to help his friends, a 56-year-old man, who suffered from a cardiac arrest and drowned in the rip current after saving 2 teenage girls at Atlantic Beach, and 2 teenage boys, 16-year-old Tyreese Worsley and 17-year-old Elijah Hinnant, who were both caught in a rip current and drowned at a beach on Emerald Isle.

According to the NOAA (National Oceanic and Atmospheric Administration), our state has seen a total of 54 rip current deaths since 1996, and the death rate has continued to increase since then;

The NOAA posted numerous strategies for staying safe in the ocean:

▪ Whenever possible, swim at a lifeguard-protected beach.

▪ Learn how to swim in the surf.

▪ Be cautious at all times, especially when swimming at unguarded beaches.

▪ Obey all instructions and orders from lifeguards.

▪ Stay at least 100 feet from piers and jetties.

▪ Wear polarized sunglasses to help you spot signs of riptides – such as a break in the pattern of waves approaching the shore.

If caught in a rip current:

▪ Never fight against the current.

▪ Think of it as a treadmill that cannot be turned off, which you need to step to the side of.

▪ If you are unable to swim out of the rip current, float or calmly tread water. When out of the current, swim toward shore.

▪ If you are still unable to reach shore, draw attention to yourself by waving your arms and yelling for help.

If you see someone in trouble:

▪ Get help from a lifeguard.

▪ If a lifeguard is not available, have someone call 911.

▪ Throw the rip current victim something that floats – a life jacket, a cooler, an inflatable ball.

▪ Yell instructions on how to escape.

▪ Remember, many people drown while trying to save someone else from a rip current.

To find out more information about rip currents and how to stay safe while swimming in the ocean, you can visit www.ripcurrents.noaa.gov.