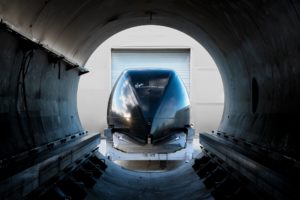 How would you like to travel between Charlotte and Raleigh in under 20 minutes?

That might soon become possible if Richard Branson gets his wish of building a network of ‘Hyperloop’ transit systems around the country.

Last week, Virgin Hyperloop One‘s marketing director, senior civil engineer, and other leaders traveled to Raleigh for the second time to talk to state leaders about the possibility of bringing the technology to the Tar Heel State.

After the meeting, the company sent out a press release, saying that North Carolina is now the 9th state in the nation to work toward implementing the new technology. “There is a tremendous opportunity to further connect these regional anchors and link North Carolina’s capital area with markets to the south and the northeast using a more efficient, sustainable, and reliable form of passenger and cargo transportation. It’s incredibly energizing the see North Carolina and the Triangle region take this important step forward in amplifying its vision for what 21st-century transportation can be,”  said Jay Walder, CEO of Virgin Hyperloop One

Virgin recently completed and tested a 550-yard-long prototype in Nevada, officially making them the only company in the world to successfully test hyperloop technology at scale. At last week’s meeting, the company’s engineer referred to the Nevada test as their “Kitty Hawk Test” (in reference to the Wright Brothers first flight tests in North Carolina).

The revolutionary Hyperloop technology allows trains to travel at 600+ mph speeds by eliminating all friction around the vehicles, including air friction (via sealed and pressurized tubes) and track friction (via a non-contact electromagnetic rail system).

The company now expects to receive federal approvals to build their first full-scale hyperloop system in California by 2024.