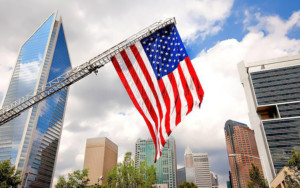 The Tar Heel State was just ranked the 10th most patriotic state in America by analysts at personal finance website Wallet Hub.

To determine where Americans bleed the most red, white and blue, WalletHub compared the 50 states across 13 key indicators of patriotism in two key dimensions – “Military Engagement” and “Civic Engagement”. The data set ranges from average number of military enlistees to share of adults who voted in the 2016 presidential election to AmeriCorps volunteers per capita.

Some of North Carolina’s highest indicators were (1=Most Patriotic; 25=Avg.):

Gastonia is also home to the world’s largest flying American flag – I’m sure we would have ranked higher if that was factored in.

Here’s where the other states rank;

How patriotic do you think North Carolina is?