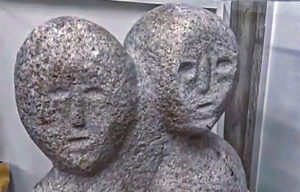 Deep in the mountains of Western North Carolina lives a group of mysterious crypto-humans with small statures, flat faces, and pronounced ‘moon eyes’, according to legend.

The Cherokee believe that the moon-eyed people were blinded by the daylight and were only able to come out at night, using their enlarged eyes to see clearly in the moonlight.

Sightings were so common in the colonial days of North Carolina that Thomas Jefferson even referred to them in his 1803 ‘Indian Removal Act’.

Soon after Jefferson’s mention, a full-sized 300lb soapstone statue was discovered in Murphy, N.C., depicting what many believe to be 2 Moon-Eyed people.

There’s even been an entire book written about the moon-eyed people in North Carolina, entitled, “The Secrets and Mysteries of the Cherokee Little People”

What do you think about the moon-eyed people of North Carolina?