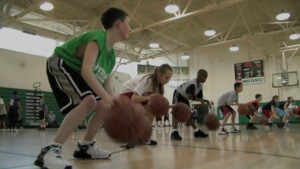 “No parents or adults allowed” declares the sign outside the south Charlotte gym at Jay M Robinson Middle School. But on this fall Monday evening there is an army of boys in the gym playing basketball – without adults – just by themselves.

Yes I Can Basketball, a Charlotte youth basketball program has rented the gym for 7 Monday evenings to allow boys in their program to come and simply play – for free. But what is unique about the program is the insistence that parents or adults are not allowed in the gym.

Marcus McGovern, one of the directors of Yes I Can Basketball said “This idea was born for several reasons. The first is because it’s almost impossible for boys this age to find quality gym time to play. Older boys or men dominate the limited gym time at local YMCA’s or recreation centers. Young boys are pushed to the side and that discourages them to the point they eventually will stop making the effort. “

Also, and no disrespect intended, but boys sometimes need a relief from those “helicopter parents” that hover over them in youth athletics. They can play a game without the critical eye or voice of a dad in the stands.”

“And finally, in today’s climate, boys rarely participate in any kind of activity unless a parent plans it and directs it.” Added McGovern “We want boys to experience what it feels like to organize themselves: without depending on adults. Our staff is there simply to supervise but that’s it. We purposely stay out of their way and insist they organize themselves. We want the boys to learn how to organize, lead and direct on their own.”

Two separate sessions are offered with 10-11 year old boys reporting at 6pm and 12-14 year old boys arriving at 7:15. The first 40 boys to arrive and sign in are accepted. No fee is charged, it’s free to any boys enrolled in the Yes I Can Basketball program.

“My husband and I have tried not to fall into the trap of overscheduling our children.” said Mrs. Stacy Leach. “It is easy to fall into a routine, monotonous schedule that is perfectly predictable and hectic. We were so excited when the NO PARENTS ALLOWED gym sessions were offered! Finally, something unpredictable for our son where he could learn the important skill of adapting to the unexpected and just have fun with no pressure from adults, parents, and coaches.”

Mrs. Kim Diaz, whose two sons Nick and Noah attend each Monday evening said, “I love this parent free gym time. It helps the boys to develop leadership skills. After the first session I was ecstatic to hear that my ten year old son was involved in taking the initiative to suggest the group split into teams by designating captains and then coordinating the games.”

Kim’s ten year old Nick Diaz said “ I like going to open gym because it helps me to get better without coaches teaching me. I really like having the opportunity to play 5 on 5 full court games because I rarely get to do that outside of my organized league games!”

Mike Behrman added “ The sandlot has become a nostalgic idea amidst all the structure imposed on today’s kids.” The open gym is an absolute breath of fresh air and provides my son Daniel the opportunity to organize teammates and to play freely and joyously. His big smile is all I need to see to know the positive effect of this weekly pick up game.

“This has been such a big hit with our Yes I Can Basketball families that we’ll plan on offering this again.” said McGovern “And yes – parents will continue to be turned away.”