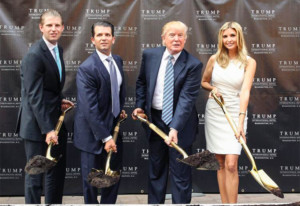 During Eric Trump’s recent interview with the New York Times, he announced that the Trump organization might be heading to Charlotte to build one of their new Scion branded Hotels.

The concept behind the Trump organization’s new Scion hotel brand is to create a hotel chain that will attract young business travelers in the creative and technology sectors. Room prices will start at $200 or $300 a night, according to Eric Danziger, the chief executive of Trump Hotels. The average price of a Trump International Hotel now averages $700 per night.

Eric Trump noted that they were hoping to locate Scion, offering a lower-price alternative to their Trump International Hotel brand, in large to midsize “trendy” cities like Austin, Tex., Charlotte, N.C., and Nashville.

The first Scion hotel is now planned for Dallas, TX.

Over the past decade, the Trump family has taken a real liking to Charlotte. In 2007, they put an option on a piece of land on Tryon St. in Uptown Charlotte to build our cities tallest building, but those plans were put on hold when the economy crashed. In 2012, they purchased a golf resort on Lake Norman and poured millions into repairs and upgrades on the course.

Donald Trump has since made regular visits to Trump National Charlotte for both business and pleasure trips.

What do you think of Trump’s new Scion hotel coming to Charlotte? Would you stay in it?