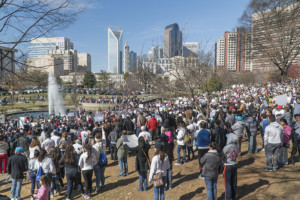 The US Census just released their new 2017 population estimates showing that North Carolina saw one of the highest population increases in the nation.

The Tar Heel state grew by a whopping 117,000 residents between July 2016-July 2017, making us the 5th fastest growing state in the nation. This represented a 1.15% growth rate – almost double the national average.

We kept our spot as the 9th most populated state between Georgia (#8) and Michigan (#10).