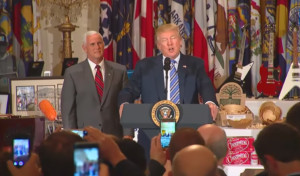 Representatives from North Carolina’s own Cheerwine soda company visited the White House today for President Trump’s ‘Made in America’ event. The event was said to highlight and celebrate each state’s effort and commitment to American made products, bringing in 1 company to represent each state.

According to an official press release from the White House, the “‘Buy American and Hire American’ Executive Order…targets the abusive use of waivers and exceptions to undermine ‘Buy American’ laws that promote the allocation of taxpayer funds to American companies.”

In addition to Cheerwine representatives from North Carolina, the event also included leaders from the following companies, representing their respective states;

What do you think about the new ‘Made in America’ week?

What do you think about President Trump’s job in office so far?