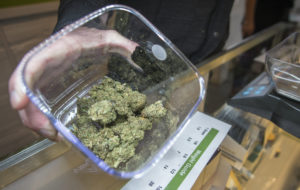 North Carolina might soon ban smokable hemp flowers after several law enforcement agencies have complained about the difficulty in distinguishing between ‘hemp buds’ and ‘marijuana buds’.

After hours of debate this past Wednesday, the NC House passed the North Carolina Farm Act, a bill that would make several changes to our hemp laws, including making smokable hemp illegal.

The bill even goes as far as defining smokable hemp as the same as smokable marijuana, attaching to it the same legal penalties for possession.

Currently in North Carolina, it’s legal to buy smokable hemp and other ‘CBD products’ over the counter. Charlotte now has several ‘CBD shops’ that look and smell exactly like legal marijuana dispensaries in Denver and Portland.

Unlike marijuana, smoking hemp does not give users a high, as it doesn’t have enough of the psychedelic compound THC in it. Instead, smokable hemp has a much higher level of CBD (compared to the relative low amount of CBD that smokable marijuana has), which has a growing list of medical benefits.

The revised Farm Act will now be discuss and voted on in the Senate. If passed, it would move on to Governor Roy Coopers desk for final signature or veto.