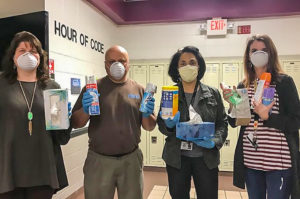 As soggy cold weather increases around our region, we’re now seeing the start of the 2019-20 flu season.

Officials with the North Carolina Department of Health and Human Services’ Division of Public Health (NCDHHS) have announced the first reported flu-related death this season, involving an adult in the central part of the state. To protect the privacy of the family, the person’s location, age, and gender will not be released.

“We are very saddened by this death and send condolences to the loved ones of this person,” said State Epidemiologist Zack Moore, M.D., MPH. “Flu is a serious illness and in some cases can lead to complications and even result in death, which is why we strongly encourage people to get vaccinated every year.”

In addition to the flu shot, many Charlotteans are turning to alternative types of remedies to avoid the potentially deadly virus.

One of the most common alternative remedies that an increasing number of people are swearing by is essential oils, and especially essential oil blends that are specifically crafted to kill viruses and boost immune systems.

Others are turning to a more ancient fruit-derived remedy to fight the flu – Elderberry Syrup. One local resident has even started a new company, Sweet’s Syrup, bottling and selling her own brand of the stuff in shops all around the Queen City.

While most alternative remedies have been slow to find favor with the NCDHHS, NC Health officials do recommend taking extra vitamins, exercising, and eating healthier to strengthen your immune system as this year’s flu season ramps up.