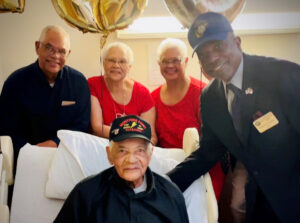 Walter E. Gaskin, Lt. General, USMC Ret., Secretary of the North Carolina Department of Military and Veterans Affairs (NCDMVA) paid tribute to an original Montford Point Marine and World War II Veteran, Cosmas D. Eaglin, Sr, of Fayetteville, NC, with a certificate of appreciation and the Department’s challenge coin. Mr. Eaglin’s family was present for the intimate congratulatory gathering where the 108-year-old veteran was delighted to receive the recognition of his service.

Born January 12, 1915, Eaglin joined the United States Marine Corps when he was 27. He completed training at Camp Montford Point, in Jacksonville, NC, and was one of the first 300 black recruits to break the Marine color barrier after President Franklin Roosevelt issued an Executive Order establishing the Fair Employment Practices Commission in 1941. Eaglin served two years in the Solomon Islands campaign during the Pacific War of World War II. After WWII, Eaglin left the Marine Corps but returned to active-duty service and earned his paratrooper wings once joining the U.S. Army during the Korean War era. He was assigned to Fort Bragg, NC in 1951. He also served two tours in the Vietnam War in the 1960’s.

“When I learned of Mr. Eaglin and his service to our country, I found it truly admirable and an inspiration,” said Gaskin, “As an original Montford Point Marine, he endured unimaginable obstacles in the segregated Marine Corps. Because he was a Marine, I am able to be a Marine. His contributions to the nation and the Marine Corps will be remembered and his legacy will live on for generations to come.”

Eaglin has 6 children, 7 grandchildren, and 12 great-grandchildren. He and his family have been part of the St. Ann Catholic Church community in Fayetteville for 72 years. NC DMVA Secretary Walter Gaskin, and Eaglin’s beloved family, gathered in the North Carolina State Veterans Home in Fayetteville to honor this man who has never stopped giving to his family, community, and country. We admire his strength, resilience, and honor his service to our country with appreciation for the inspiration he instills in all of us.