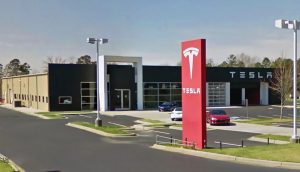 The North Carolina Department of Motor Vehicles recently ruled that Tesla Motors cannot sell or take orders or deposits for cars at its Charlotte area showroom and service facility, and blocked them from trying to sell cars at any new facility.

Consumers will still be able to buy Teslas from the company’s store in Raleigh, although the Raleigh store is also selling direct to consumers, which is the entire reason why the NC DMV blocked Tesla sales in Charlotte.

North Carolina state law technically prohibits any auto manufacturer from selling directly to consumers, unless the car maker is able to secure an exception, which is only granted if the car company shows that selling directly would benefit consumers.

Tesla recently applied for that exception in Charlotte and several local car dealers as well as the North Carolina Automobile Dealers Association objected. The DMV then held a two-day hearing in Matthews, which resulted in a rejection of Tesla’s exception.

DMV hearing officer Larry Green said that not only did Tesla fail to make its case that selling its own cars would be in the best interest of the public, but there was also a local alternative. Green said that of four local dealers who were “willing” to sell Tesla automobiles, in his estimation three of them are qualified to do so.

Tesla’s next step would be to appeal to the DMV commissioner in Raleigh, and if an appeal doesn’t work, they could then take the NC DMV to court.

Many are now asking why the Raleigh Tesla Store can remain open without any local dealers or the DMV trying to block them. Are car dealers now fearful of the all-electric car maker’s increasing popularity? Or is this another attempt by Raleigh to show their dominance over the Charlotte market?

What do you think?