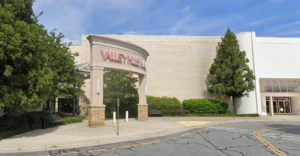 This past Thursday a mother was accidentally shot by her boyfriend’s 9mm pistol in Hickory, NC’s Valley Hills Mall.

According to police, Taliah Tilley was walking through the mall with her son and her boyfriend, A-Duan Namon Walker. Her son unintentionally knocked Walker’s 9mm out of its holster, the gun then hit the ground, discharged, and a single bullet hit both of Tilley’s feet.

She is still recovering after last weeks accident since doctors couldn’t fully remove all of the bullet fragments out of her feet.

A summons has been issued by a local magistrate for Walker on a misdemeanor charge of carrying a concealed weapon without a permit.

A member of our well regulated militia arms himself to shop at @ValleyHillsMall with his family. He picks up his child and the child kicks his holstered gun and fires it, shooting the child's mother in both feet. https://t.co/W2YrwOvoju