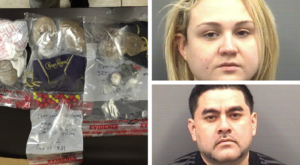 This past Tuesday three Mecklenburg County residents were arrested in a large-scale heroin trafficking investigation. Local, state, and federal agents have been working together on the case since 2013.

Gerardo Juarez, 39, of Matthews, Darya Sergeyevna Borovskaya, 26, of Matthews, and Hugo Fernando Navarrete-Lopez, 27, were all arrested in Rowan County for their alleged involvement in the distribution ring. It’s now believed that they have been in direct communication with Mexican drug cartel leaders, according to the press release.

Juarez was arrested in the Walmart parking lot on South Arlington Street in Salisbury. He had 52 grams of heroin on him. A search warrant was executed at the man’s Matthews home, where detectives say they found 478 grams of heroin, three guns, numerous telephones, U.S. cash, drug paraphernalia and other items related to drug trafficking.

Investigators also found that the Charlotte-Matthews area Mexican trafficking ring had been supplying heroin to Rowan County for over 10 years, often in quantities of $10,000 or more at a time.

In Dec. 2016 and Jan. 2017, undercover agents bought large quantities of heroin from two suspects thought to be working for the Mexican National Drug Trafficking Organization (MNDTO). Many of the transactions happened in parking lots and shopping centers, and the suspects used fraudulent registration plates and alias names.

Deputy Ramsey remarked that, “one transaction occurred at a restaurant bathroom in China Grove.”