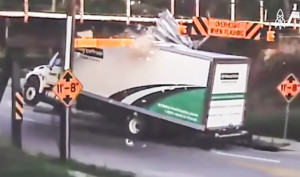 While most bridges in North Carolina have 15′ clearances, there’s one very special bridge in Durham, NC that only has an 11′ 8″ clearance, and because it’s so rare, many drivers ignor the warnings.

After noticing several crashes under the old bridge, Jürgen Henn decided to set up a camera outside of his office to see if he could record a crash or two. He soon discovered that there were far more crashes happening than he imagined.

You can find out more about Jürgen and his quest to flood the internet with crash videos on his website 11foot8.com.

Also – if you’re ever driving a truck that’s over 11′ 8″ tall near the intersection of Gregson and Peabody streets in Durham, North Carolina, don’t drive under the bridge!