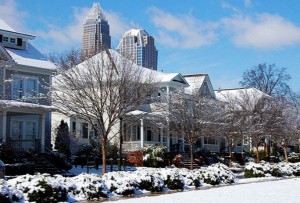 A ‘Hazardous Weather Outlook’ has just been issued by the National Weather Service for a major winter storm that will be moving through the Charlotte region.

Forecasters are now predicting that as much as five inches of snow could fall on Monday in the Queen City.

A wintery mix of sleet and rain is also possible, depending on where exactly the system shifts to (plus or minus 15 or 20 miles could result in rain instead of snow).

Although snow isn’t guaranteed, the odds are in our favor for needing milk and bread, as forecasters have given the Charlotte region a 60 percent chance of snow on Monday during the day, and 70 percent on Monday night.