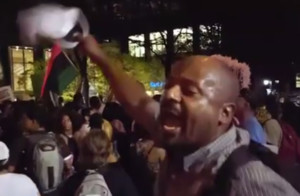 Last week’s protests following the death of Keith Lamont Scott included a wide range of groups and goals, some people wanted to peacefully protest against injustice, others wanted to pray for the hurting, and some, especially on Tuesday and Wednesday nights, wanted to protest through rioting, looting, and violence – but one voice was heard above them all – Sam Bethea.

Sam is a staple at the corner of Trade and Tryon with a unique approach to street preaching. While many street preachers will focus on people sins and talk about going to hell, Sam simply wants to tell people that “Jesus Saves”.

During several nights of the protests Sam could be seen and heard marching with the crowd, chanting ‘Jesus Saved’ with impressive consistency and longevity. His large size and booming voice caused him to be both seen and heard above almost every other protester that offered comparatively short chants of “Release the tapes!” and “No Justice, No Peace”.

I recorded him for about 20 minutes during Saturday night’s protests:

Sam was recently interviewed by Esquire, where he told them he was only steps from Wednesday night’s shooting. The shooting caused him to pause for a moment, then he quickly resumed his chant of hope.

Although a few people found him annoying, I came to realize that he was actually brining peace to many people around him. When asked why people stay calm around him, Sam replied, “It wasn’t me. It was the Holy Spirit through me.”

Sam told the Esquire that he was handing out “I love Jesus” lanyards on Thursday afternoon, one such man approached. “He was kicking in windows last night. I saw him on the news,” Bethea commented. “Let’s see what he says.”

“I had to go savage,” the man told Bethea, laughing.