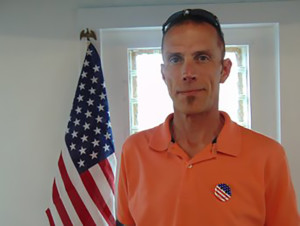 Brian Talbert, a member of ‘Gays for Trump’, and Deplorable Pride, said his group’s application was denied because they supported the president.

The annual parade draws over 100,000 visitors to Uptown Charlotte and Talbert said he wanted to celebrate pride and patriotism with the other performers.

The group planned for one of their floats to be draped in red, white and blue streamers with drag performers dressed as Melania Trump and the Statue of Liberty on the float.

“For a group of people to claim to want tolerance, acceptance, and give it to every single person you can imagine to give it to, for them to sit back and judge me for exercising my right as an American to choose my leader without judgment is hypocritical,” he added.

A Charlotte Pride spokesperson said they have a right to turn away groups that “do not reflect the mission, vision, and values of our organization.”

Talbert has now started a GoFundMe page to raise money for the legal fees to sue Charlotte Pride for discrimination. The campaign has already raised $7,363.

Do you think ‘Gays for Trump’ should have been allowed in the parade?