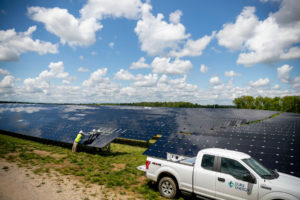 The plant is expected to be in service by the end of 2021 and will produce enough energy annually to power about 1,000 homes and businesses.

“The people of Buncombe County recognize climate protection as one of the most urgent issues facing our world today,” said County Board of Commission Chairman Brownie Newman. “The solar landfill project is an important part of our initial strategy to accelerate the transition to clean, renewable energy. We are excited to see it move forward.”

The new solar plant will help meet the county’s 2030 renewable energy goals, while providing energy to Duke Energy Progress customers in the Carolinas.

Sourcing its renewables from local generation was identified as a top priority during the county’s renewable energy community engagement process. This project will allow the county to reach nearly 20% of its renewable goal with locally sourced clean energy.

The landfill stopped operating in 1996. To avoid disturbing the ground covering, the solar racking system will be built on concrete blocks instead of being anchored into the ground. Underground cabling will be kept to a minimum. Check out video footage of the site.

The project will be located on 25 acres and will be connected to the Duke Energy Progress power grid. Under a 25-year agreement, the county will lease the land to Duke Energy. For Buncombe County to include the solar power generated toward its 100% renewable energy goal, it will own the renewable energy certificates (REC) from the Duke Energy power plant to offset the energy used from the county’s operations. In exchange, Buncombe County is allowing Duke Energy to utilize the property at no cost.

As part of the overall Western Carolinas Modernization Project, Duke Energy finished construction of the $817 million Asheville Combined Cycle Station, which became fully operational in 2020. The new station replaced a 344-megawatt, two-unit coal plant at the Asheville site, which retired in early 2020.

The company’s efforts in the region also include increased participation in energy efficiency and conservation programs to reduce energy usage, a battery storage project in Asheville and a solar and battery microgrid system in neighboring Madison County.  In total, 15 MW of solar and 5 MW of battery will be deployed in the region as part of the Western Carolinas Modernization Project.

Duke Energy is a national leader in renewable energy. It operates more than 40 solar power plants in North Carolina. The state is ranked third in the nation for overall solar generation.