Hickory native Doug Teague has just taken what may be the clearest videos of a North Carolina bigfoot ever seen in our state.

Teague spotted the creature while he was walking his dog ‘Crazy Daisy’ through a patch of woods just outside of the city of Hickory, NC. He was checking on some of his trail cameras when he heard some loud knocking sounds off in the distance.

When he walked closer to investigate, he spotted the creature on top of a ridge and began to record;

He said the creature could not have been a bear since it began throwing rocks at him when he approached.

Teague is a member of the Catawba Valley Bigfoot Research Club and the Facebook group ‘Bigfoot 911‘. 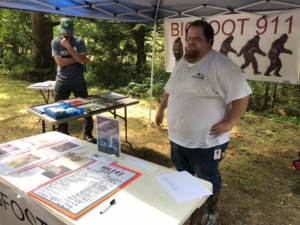 The group will be hosting a Bigfoot Festival next month on September 14th, from 9am – 4pm, sponsored by the Marion Downtown Business Association and McDowell Chamber of Commerce.

Organizers are planning on having a wide variety of craft and food vendors, with a heavy emphasis on Sasquatch-themed items. There will also be book signings, lectures, and live demonstrations about how to hunt for the mysterious creature.

This year, they will be adding the first annual Bigfoot Chase 5k. The new 5K will take participants throughout downtown Marion as well as past some places you might spot Bigfoot himself.