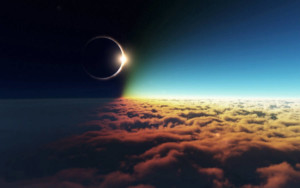 The ‘Great American Eclipse’ will be rolling through the Carolinas this coming Monday afternoon (Aug. 21), starting at about 1pm EST.

Who will be able to see the ‘Great American Eclipse’?

Government officials now think that that number could swell to over 100 million as Americans from every part of the country travel to the ‘path of totality’ over the weekend.

The following video fly’s over the eclipse’s totality band, starting in Salem, OR and ending in Charleston, SC:

What time does the eclipse begin and end?

The eclipse will gradually sweep across the country, starting at about 12pm EST in Salem, OR (9am PST) and ending at about 4:15pm EST in Charleston, SC.

Along the path of totality, the sun will be completely darkened for approximately 2 minutes.

Here’s a chart showing the times the eclipse will be visible in major cities across the country: What happens during an eclipse?

The sky will darken, temperatures will drop, stars will appear, animals will exhibit strange behavior, and the moon will become a total black orb, cutting across the face of the sun. Once the sun is darkened, you’ll be able to see. You will also be able to observe Baily’s Beads (specks of sunlight around the lunar crust).

At totality, you’ll also be able to see the sun’s corona – an extremely hot ring of solar flares and burning plasma.

Here’s what the total solar eclipse will look like from Earth:

Do I need eclipse glasses to view the eclipse?

Yes (unless you only open your eyes during the 1-2 minutes of eclipse totality, which is almost impossible) – even if 99% of the sun is covered during the eclipse, the remaining 1% of the sun’s rays is dangerous enough to cause serious eye damage or blindness.

Many locations across the Carolinas have already ran out of stock on solar eclipse glasses, but you can still buy them on Amazon and select 1-2 day shipping to receive them before Monday.

The American Astronomical Society has identified four manufacturers that are selling eclipse glasses that meet the international safety standard: American Paper Optics, Rainbow Symphony, and TSE 17. Safe glasses should have a reference number of ISO 12312-2 on the front or sides of the frame.

Make sure your glasses aren’t scratched or damaged before using them!

Can I use a smartphone to photograph the eclipse?

Yes, you’ll be able to take pictures of both a partial and total solar eclipse without a solar filter using your smartphone. NASA says the lens in many smartphones is too small to be damaged by the sun’s rays.

What if it’s cloudy?

Even if the weather is overcast on Monday, the sky will still darken during totality, and animals will still act strangely.