On Wednesday (Dec 18), Hannah Johnson, a 36-year-old firefighter from Greensboro, will compete in a new Discovery series “Man Vs. Bear” – going up against Grizzlies in challenges based off the bears’ natural instincts and predatory skills. There is tug-of-war, tree climbing and an eating contest…think of it as American Ninja Warrior, but with bears.

Each week, three Grizzlies – Bart, Honey Bump and Tank – will take on three new human competitors at their Utah sanctuary to test the limits of strength, speed and stamina. All challenges will be based on the bears’ natural instincts as well as predatory skills and actions – whether it’s engaging in a monumental game of “tug of war” or using brute force to roll giant logs.

Bart is the largest, most powerful grizzly on the mountain with no other bears matching his strength and versatility. Topping the pack as the fastest is Honey Bump, who is the only female on Bear Mountain. She brings a level of ferocity and predatory instinct that her male counterparts cannot beat. Bart and Honey Bump were orphaned as cubs and discovered by an Alaska State Trooper. After a nationwide search for a loving home for the rescued cubs, they were adopted by caretakers Doug and Lynne Seus. Along with Tank – known for his voracious appetite – the Seus’ have raised and cared for all three bears for two decades on a sprawling section of protected land. 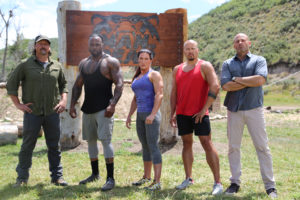 Each episode will include five distinct challenges inspired by what bears do naturally in the wild, pushing these brave men and women to their absolute limits. In the final round, the top two competitors will come face-to-face with Bart, who stands 8 feet 6 inches tall and weighs 1,400 pounds. The human competitor who earns the most points of the day will be named champion.

But the competition isn’t over yet. At the end of the season, the top three competitors with the most points will return one more time for the super-human showdown against the bears.

“Competing against bears is both scary and exciting,” said Ira, an MMA fighter and competitor from Dallas, Texas. “It’s competing against the unknown. This is a completely new challenge for me.”

Viewers can also get to know the bears and discover more about their lives on Bear Mountain here.