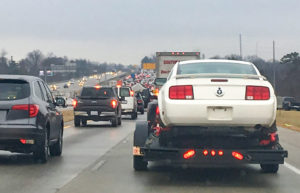 This morning police shut down I-85 south in Gastonia for over an hour after a man walked into oncoming traffic.

The incident began around 11:30am near exit 23 when a highway patrol officer pulled over a man in a red pickup truck for tailgating the car in front of him.

According to a statement from the NC Highway Patrol, the man exited his pickup truck, put his hands in his pockets, and proceeded to walk into oncoming traffic.

More officers soon arrived and shut down all southbound lanes on I-85. The man was then taken into custody and all lanes were eventually reopened.

UPDATE: I-85 near McAdenville is reopened in both directions after a traffic stop leads to a confrontation with Highway Patrol. Troopers say they pulled over a man who then left his vehicle and approached them with his hands in his pockets. (1/2) pic.twitter.com/qMt2y8YVHq

According to the highway patrol, the man was taken to CaroMont Regional for a full psychological evaluation.