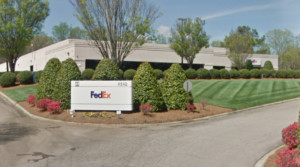 This afternoon FedEx officially opened their new ‘Ground Station’ facility in Concord, which will become their new primary distribution hub for the Southeast, according to a recent press release.

The sprawling new 343,000 sqft building is now able to handle over 15,000 packages per hour. They’ve already hired 250 employees for the new facility and they are planning to hire another 100 employees over the next few weeks for the holiday season.

“And as we grow exponentially, this facility allows us to continue to be faster,” commented Bob Holcombe, the vice president of FedEx Ground’s Southern Region. “You have access to the highways and the employee population base is fantastic.”

Cabarrus County is becoming a major distribution hub for the greater Charlotte region, and it still has plenty of room to grow along I-85. There are even currently 5 large-scale shell buildings in industrial parks along the interstate now available for lease, with over a dozen more in various stages of development and planning.