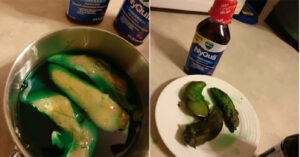 The FDA has just issued a warning urging people not to cook their chicken in NyQuil after a viral new challenge began trending on social media.

The challenge was posted and reshared thousands of times across TikTok and Twitter as the ‘sleepy chicken challenge’.

“Boiling a medication can make it much more concentrated and change its properties in other ways. Even if you don’t eat the chicken, inhaling the medication’s vapors while cooking could cause high levels of the drugs to enter your body,” said the FDA. “It could also hurt your lungs.”

The FDA also warned the public against consuming large quantities of Benadryl when several teenagers were taken to the hospital after taking TikTok’s “Benadryl challenge”.