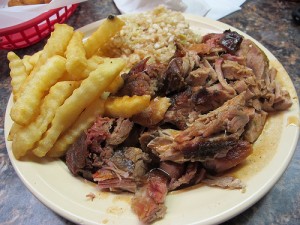 While the debate rages on in regards to the best tasting type of BBQ, some people also want to know, which style is the healthiest?

Insurance company Blue Cross and Blue Shield of North Carolina decided to run the numbers to determine if you should eat Eastern or Western Carolina bbq, if the taste wasn’t a factor.

They found that traditional Western Carolina sauce uses more calories and fat than Eastern Carolina with the addition of butter and brown sugar, but they found there was an even bigger determining factor besides the sauces.

According to the report, the type of meat used in each bbq variety was the largest factor when it comes to health differences of the two classic recipes;

“Down east, the whole pig is used (“every part of the pig except the squeal”); white meat and dark meat. Lexington style features only the pork shoulder which is 100% dark meat- it’s rich, moist, and contains more fat than eastern style barbecue. That ramps up both the flavor and the calories — dark meat contains roughly 13% more calories from fat than white meat (66 calories per ounce vs 75 calories per ounce). If a plain pulled pork serving of 3oz is 198 calories, the same portion with dark meat would be 225 calories. Sadly, that tips the scales in the favor of Eastern BBQ considerably.

If you’re planning the type of barbecue you eat around your health, then we recommend eastern style barbecue. The lighter sauce mix and the addition of white meat is better for your overall heart and cholesterol health.”

Western bbq, however, is still slightly healthier than South Carolina’s traditional mustard-based bbq, since their traditional recipe still calls for the whole pig to be used, while adding honey, brown sugar, and mustard to their sauce – a result of the region’s German heritage;