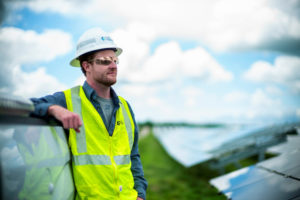 “The Green Source Advantage is an ideal fit for colleges and universities seeking to advance their renewable energy and sustainability goals,” said Stephen De May, Duke Energy’s North Carolina president. “The innovative program’s flexibility allows for a major expansion of renewable energy in North Carolina.”

The agreement will help Duke University’s ambitious effort to become carbon neutral by 2024.

The expanded solar energy fits into the university’s Climate Action Plan, which was launched in 2009 and updated in 2019 with a goal of reducing on-campus emissions by 84% by 2024, with the remaining emissions reduced to zero through investment in carbon offsets.

Duke University will partner with Asheville, N.C.-based Pine Gate Renewables to build the solar projects, which are being developed in partnership with Silver Pine Energy Holdings. The facilities will be online by 2022.

“We are excited to partner with Duke Energy and Duke University for these projects,” said Pine Gate Renewables CEO Ben Catt. “We’ve developed, constructed and energized dozens of solar projects with Duke Energy over the years, and look forward to bringing more renewable energy to North Carolina through innovative and exciting programs such as GSA.”

“This partnership (with Pine Gate Renewables) is a key step toward carbon neutrality,” said Duke President Vincent E. Price. “Duke is committed to building on our history of leadership in protecting the environment, a vitally important priority for our university – and for humanity – as we grapple with the challenges of climate change.”

The GSA program is an outgrowth of 2017’s landmark solar legislation in North Carolina. Programs such as solar rebates for customers and solar leasing were also part of that legislation. Overall, there is 600 MW of capacity available under GSA. Currently, around 30 MW is still available to eligible customers.

The GSA allows large energy users to offset its power purchases by securing renewable energy from projects connected to the Duke Energy grid. The customer may keep the Renewable Energy Certificates (RECs) of the projects and use the energy purchased to satisfy sustainability or carbon-free goals.

Two other GSA contracts have been announced this year:

Under GSA, customers and developers agree on the specific project and additional costs associated with energy from the facility. Other Duke Energy customers do not pay for any part of the project.

Duke Energy maintains about 3,500 MW of solar power on its energy grid in North Carolina, which could power about 700,000 homes and businesses at peak output. The company also operates 40 solar facilities in the state. North Carolina currently ranks No. 2 in the nation for overall solar power.